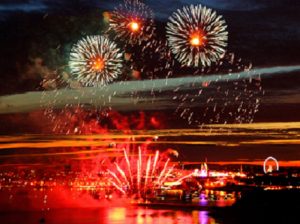 Plymouth is yet again preparing to host the internationally renowned British Firework Championships on Wednesday 14th and Thursday 15th August.

Visitors from all over the world can see the skies light up over Plymouth’s spectacular waterfront.

The British Firework Championships were started in 1997 by The Event Services Association (TESA), a trade body representing the outdoor events industry in the UK.   For some time there had been some discussion among professional display companies in the industry about creating an annual competition where they could demonstrate their skills.

After considering a number of venues around the UK, Plymouth became the favoured location as it was felt to provide a natural amphitheatre where large scale pyrotechnics could be used safely and watched from a variety of points around the harbour and Sound. Following discussions with the City Council in the mid-1990s, a partnership agreement was formed to launch the event in 1997.

Since then the Championships have grown hugely and are now recognised as the premier annual display in the UK, attracting 10s of thousands to the City each August.

Entertainment on the Hoe

As the Hoe is the focal point for watching the Championships, entertainment is provided here throughout both evenings.

In addition to a fun fair, with thrill rides, Heart FM will be providing live music on a stage.

Alternatively you can just sit and watch the comings and goings of yachts and other craft on Plymouth Sound.

About the Author: Rose